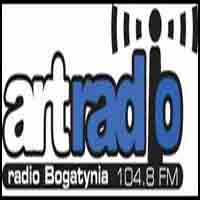 Art Radio 104.8 FM took off exactly on September 1, 2007. Twelve presenters from all over Poland from Bogatynia started their shows, and in Masuria finished. On February 1, 2010, the broadcasting station began to work with the Bogatynia Television, which allowed the broadcasting of a radio signal in the background of a cable television teletext. The breakthrough of the radio is May 2011 when, on the basis of the radio license received from KRRiT, ArtRadio Bogatynia can be heard on VHF waves, on the frequency of 104.8 Mhz. In February 2013, the radio station won the competition and received a license from the National Broadcasting Council. The founder and founder of the radio is Artur Wieczorek.